Grpc-akkastream, the akka-stream implementation built on top of GRPC looks good on the surface but if you look under the hood there is one problem: it doesn’t provide any support for back-pressure.

The only solution is for the consumer to tell the producer to slow down so that it can cope with the flow. That means there should be a communication channel going back from the consumer to the producer. This channel is aimed only at signalling to adjust the throughput of messages.

All the building blocks of an Akka-stream: Source, Flow and Sink are actually graph stages.
A graph stage is made of ports and some logic to route/create/consume messages.
There are 2 types of ports:

Using these 2 types of ports it’s possible to build any graph stage:

Now to implement back pressure each port provide 2 operations: pull and pushed.

An output port can only push an element out if it has been pulled by downstream.
An input port has to pull the upstream to receive an element.

In order to know when a port has been pulled or pushed Akka-stream provide the associated handlers.

The principle is simple: Every time an output port is pulled (from the onPull callback) method it is allowed to push an element out with the push method.

On the input port, every time it is ready to receive an element it calls the pull method and it can then retrieve the element inside the onPushed callback (using the grab method).

There is a catch though. The push method can’t be called outside of the onPulled method because everything actually happens sequentially:

That’s quite a problem if you’re not in control of when the element are generated. Let’s imagine that you want to create a Source of elements coming from HTTP requests, or elements published on a Kafka stream, … Obviously you can’t control when the elements are generated and you can’t guarantee that an element will be available when the downstream stages will trigger the onPulled callback on your Source.

Fortunately there is a solution to this problem: Async callbacks.

Whenever there is an element available you wrap the push call into an async callback.

Now that we know how to implement back-pressure inside Akka-stream let’s see how it’s done in GRPC.

Everything seems to go forward. Whenever an element is available the onNext callback is invoked and there is no way for the consumer to slow down the producer.

If you scratch the surface a bit you’ll see that the StreamObserver instances actually implements the CallStreamObserver.

There is a few interesting things to note here:

And that’s it this is all we need to implement a back-pressure in a GRPC service.

This is how it’s done on the client side:

And somewhat similar on the server side: 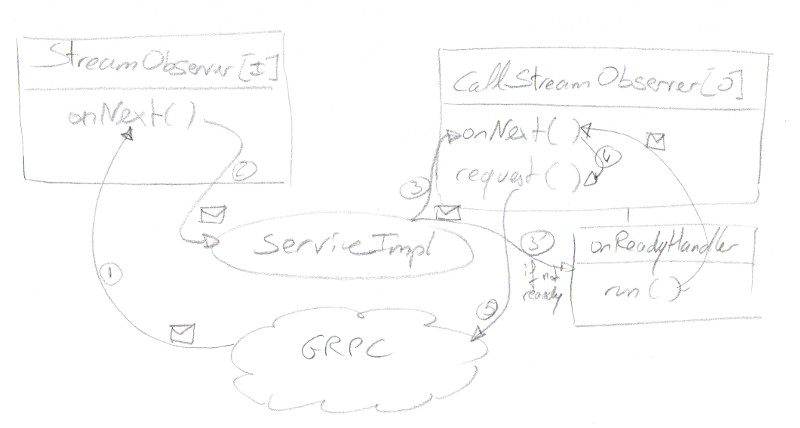 It works great for bidirectional and client streaming calls. It’s not completely the case for server calls. Why?
Because when you call a server streaming endpoint you only provide a StreamObserver for the response and the GRPC framework doesn’t return anything back.

Therefore it’s not possible to disable the automatic flow control nor to request more elements. Depending on your implementation it might not be too much of a problem as the request call is made after the onNext callback has been invoked. As long as you process completely the message in the onNext callback your service shouldn’t be overflowed. If not … well you have to dig deeper.

And if you look at the CallStreamObserver implementations you’ll see that they actually use a ClientCall or ServerCall and both of them provide a request method along with a Listener interface.

It’s always possible to use these lower-levels implementations to provide back-pressure whatever the type of call you’re making – the drawback being having to re-implement the logic present in the CodeStreamObservers.

Now that we’ve got a good idea on how back-pressure is implemented inside both GRPC-java and Akkastream, let’s see how we can put everything together and provide a fully reactive akkastream interface for GRPC.

On the server side, the Source is going to provide incoming messages to the service Flow (implemented by the user). The output of the Flow is connected into the Sink that sends the responses to the client. 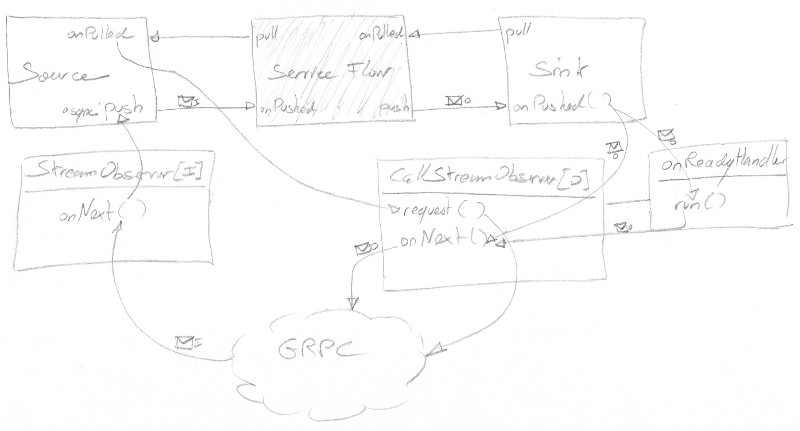 On the Source stage, every time an element is pulled by the downstream we need to request one more element from the GRPC observer using the request method.

On the Sink stage, every time we receive an element from upstream we check if the GRPC observer is ready. If it is we call its onNext method. If not we buffer the element and the onNext method will be called by the onReadyHandler when the observer becomes ready. 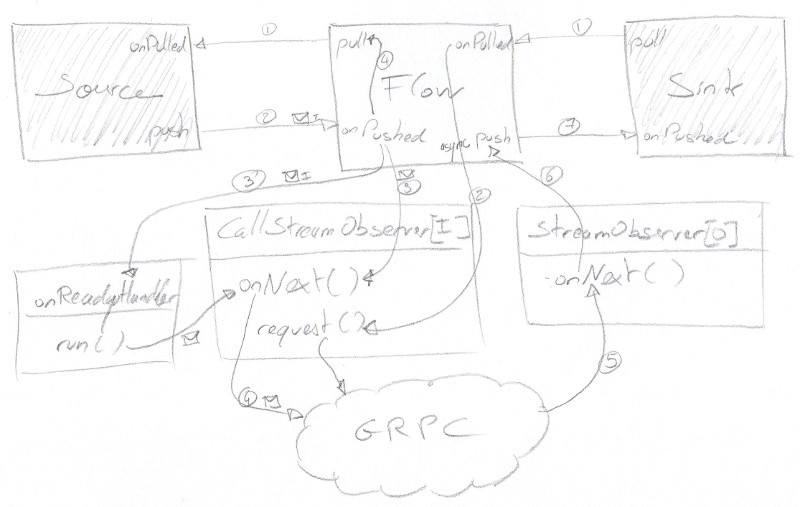 The Flow stage is simply a combination of the Source and Sink above.

All the implementation details are available inside this Github pull request. There are of course some possible optimisations like buffering more elements and requesting batch of elements at once …

For those interested in a Java reactive stream implementation there is an implementation supporting back-pressure provided by Salesforce called reactive-grpc.